The Grumpf’s a Nice Guy. Think of his Cat Policy

It’s important in an election season to get all your facts straight, to not accept everything you hear. I’ve been hearing a lot of talk, particularly on the part of these foozle, about how bad the Grumpf is. I’m here to say there’s another perspective on the matter. When people say the Grumpf is a cold and emotionless red-and-orange-faced monster, I have to tell them the story of when the Grumpf outlawed neutering cats here in the Valley. I think it shows his sympathetic side.

“So you can do it to the female cats?” one of the townsfolk asked.

“I really can’t speak to that,” the Grumpf said, smirking, “and I’m not making anyone get their cats ‘fixed’.” He turned his head to look at one of the ogres beside him, his face grown candy red against his white shirt. “And let’s stop saying that. Getting a cat ‘fixed.’ It’s not a good word. It’s a very, very ugly word.”

The crowd seemed to appreciate the remark, and the Grumpf crossed his arms against his barreled chest and nodded with most of his massive upper-body. I noticed a few angry people breaking chairs on some foozle at the back of Grumpf Plaza, not too unusual for these events.

“Having good words is good,” the Grumpf said, agitating the crowd, getting them raring to go for the Exhibition. “People tell me I’ve got great words, no problems at all. The best, of course. Nothing bad at all about the Grumpf’s words.”

Within a few days of that policy announcement—one, I think, that really does show a touch of sympathy—a bunch of protests of its alleged sexism showed up on the screens, mostly when the talking heads argued about it. Some self-identified femi-foozles tried to chain themselves to the exhibition booths, which was not a well-considered strategy on their part. The Grumpf just worked around them and it wound up being the most watched Exhibition of the whole year. You had your normal run of miscreants—townsfolk that had bad-mouthed the leader, or maybe served him with the wrong salad fork or something—and then you had about a dozen femi-foozles chained of their own volition to the worst place you’d want to be on any given evening. The meat merchants made a killing that night, and the townsfolk were pretty upbeat about the whole affair. Word is they actually ran-out of jackdaw and everyone started buying the ground chuck to throw, or to ‘chuck,’ as too many enthusiastic and intoxicated townies laughed and hurled—or, yes, chucked—the ground-up flesh-concoction. It actually worked that night, too. You couldn’t miss when you chucked the rotten groundings, the whole front of the exhibition booth presented a chain of targets waitin’ for the fodder, and those poor protesters not even able to extricate themselves from their cause.

And here’s the part of the story, I think, where we see some real emotion on the part of the Grumpf: he didn’t punish those defiant foozle for the protest. He said, magnanimously I would contend, that the protest had been punishment enough. Just before the Exhibition was over, he unchained them and brought all ten or twelve of them up on stage to talk to the townies.

One of the foozle, a little fella from the Southside in suspenders and a bloodied red bow tie, wiped the guts from his face and explained to the Grumpf that if he banned spaying he ought to ban neutering, or maybe it was the other way around, but the point is he ought to treat the two things as equal and even. Two other feathered foozle said what’s good for the goose is good for the gander, and a couple Geese Foozle nodded.

“I’m not saying you have to spay your girl kitties,” the Grumpf said, feigning surprise. “I love girl kitties. And they love me, too. Trust me.” Everyone nodded at this, seeing the reasonableness of the concession. “But I cannot speak about the female cat issue, or the female issue in general, except to say that women really, really, honest to god, just love me.” He paused and smiled wide. Some ducked behind their hands to avoid the glare of those bright white teeth, the best teeth Grumpfers can buy. “So I must be doing something right. I mean really,” the Grumpf said, gesturing wide, “just look at how successful I am.”

Then there was some chanting of ‘We love the Grumpf’ when he announced he would extend the evening’s exhibition for a few more rounds of meat-slinging. He even gave the protesters the first wad of rancid rump roast to hurl at the editor of The Valley View, the only circular not owned by Grumpf Enterprises. I think we all felt a little proud of the Grumpf that day, like he had made some real efforts to hear the complaints people were making.

So when people say the Grumpf doesn’t listen to others’ points of view, or doesn’t feel sympathy like other folks in the valley, I like to tell that story. It’s to remind everyone that even an eight foot red and orange monster-man can see things sometimes through his heart, can even empathize with a foozle now and again, if the occasion merits it.

I’m not defending the results, or even the policy itself. I’m just saying on at least one occasion the Grumpf did show some real emotion, some caring. No, he didn’t change his mind or re-think cat reproduction, and yes that did lead to the boycott of spaying or neutering in the valley, and yes that’s why we have so many cats now, and why the wheat fields are overrun (cat feces up to your ankles in those fields), and yes other things too—I admit it all—but I swear he felt compassion on that day, after pelting the Losers with raw meat for an evening, he gave them a chance to come back into the fold. He didn’t hold a grudge, not that time. He even let them throw some meat.

And maybe the cat situation turned out for the best. After all, we’ve got Exhibition Fodder at an all-time low price. The people love it!

2 thoughts on “Dang it! This townie thinks the Grumpf is a nice guy!”

This site uses Akismet to reduce spam. Learn how your comment data is processed.

Hear me, hear me: Orange Monsters are in my wheelhouse 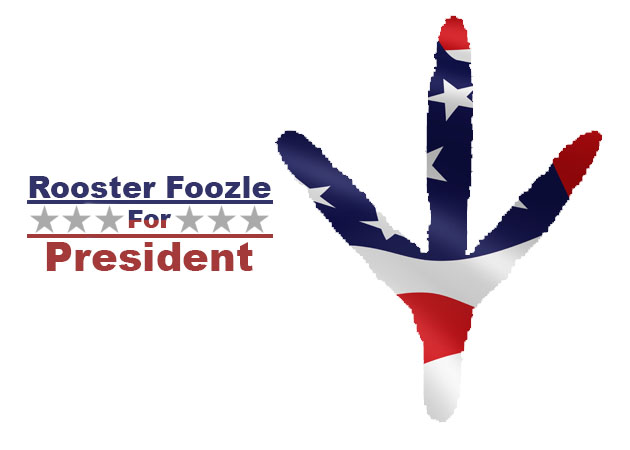 A Gallery of Rooster Foozle Propaganda! 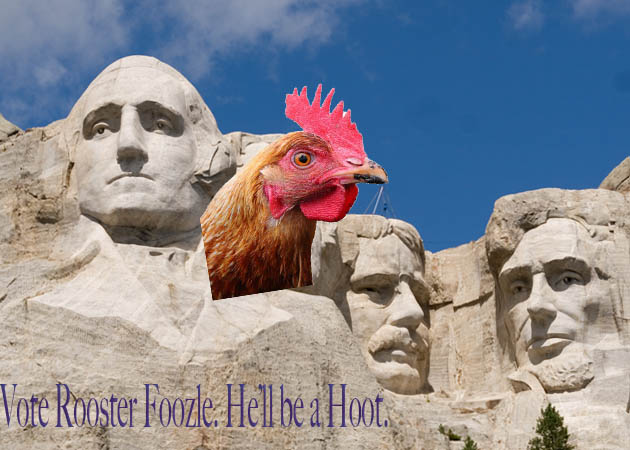 Only a bird really tweets…